Another episode of Commando Cody. In this episode Cody….. never mind. 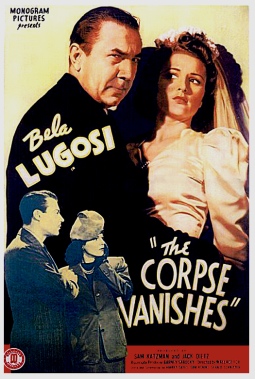 A series of brides mysteriously collapse on their wedding day after receiving an orchid. The body is then secreted away by a Dr Lorenz (Bela Lugosi). Lorenz has infused the orchids with poison and causes the ladies to slip in to a state of suspended animation. He then brings the body to the basement laboratory of his isolated mansion. There he extracts the young ladies bodily fluids to inject into his vain and aged wife so she can retain her youth and beauty.

Patricia Hunter ( Luana Walters ) is a young journalist that discovers the unusual orchids.
She is instructed to seek out Lorenz since he is know to be an expert on orchids. On her way she gets a ride with a young doctor ( Tristram Coffin) on his way to Lorenz’s home. When they arrive, Lorenz and his wife ( Elizabeth Russell ) are not pleased to see her or interested in answering her questions. When a huge thunderstorm makes it impossible for her to return home she is forced to spend the night. While there she finds the basement lab. The next morning she hurries back to the newspaper’s offices.

Hunter, the doctor and her boss decide to stage a fake wedding to trap Lorenz but he out smarts them. He captures Hunter at the wedding and bring her to his lab so he can use her fluids for his wife. As he is getting ready he is stabbed by his servant women who blamed him for her sons death. He tries to strangle the women but dies. The servant mustered enough strength to stab Lorenz’s wife also. The police arrive and rescue the young reporter. The final scene had Miss Hunter marrying her doctor friend.

The cast
Bela Lugosi is one of Hollywood’s most famous horror film stars. His greatest role was staring in Dracula in 1931

Tristram Coffin appeared in The Lone Ranger, The Adventures of Kit Carson, The Cisco Kid and The Life and Legend of Wyatt Earp

Elizabeth Russell appeared in many B-movie during the 1940’s

Lugosi at this point in his career was on the downward slide. Drug addiction was also having an affect on his acting. The rest of the cast is standard B-movie ability. There are a couple of things I do like here.

These motorcycles the cops ride are pretty cool.

The show was good. You can tell that they were getting better and more comfortable with the format.

Some of the best riffs:
It ruins so many wedding nights when the bride dies.

A midget in a stairwell. Can’t really get much shorter than.

Now I’ve got to go back here and talk to the Lion and the Witch. (Said as Lugosi hides in a wardrobe)