** Crow does a bit from his one man show “Robot on the Run” with a little nod to Red Skelton. Tom does his which seems similar to An Officer and a Gentleman.
For the invention exchange, Joel demonstrates a new guitar chord with the help of Crow. His guitar blows up. Dr Forrester and Frank invented a karaoke machine that just plays public domain songs.

Three poachers are out in some very foggy woods at night. There seems to be a bit of a storm brewing as they look around the area for eggs to steal. Unbeknownst to them a meteor is heading towards earth. Meanwhile a little boy is awoken nearby and noticed the lightning. He looks through his telescope in his room and sees the meteor hurtling towards him. It slams into the ground in the woods. The little boy gets scared and goes back to bed. One of the poachers decides to go see where it hit. He finds a glowing red cave with a bunch of eggs in it. What luck! An egg poacher finds a bunch of unusual eggs. So he does what any poacher would do, he starts smashing them with a stick. He nearly has all of them smashed when he hears something behind him. Whatever it is, it puts an end to the poacher.
The other two poachers can’t find their friend so they decide to get out of the area. They go as far as they can then make camp for the night.
The next day, the little boy is eating breakfast. His name is Tommy. He lives with his mother and uncle and he likes to collect insects.
Now it’s a recording studio and a singing group is laying down a track.

The leader is not happy with the take and they stop recording.
And now it’s back to the two poachers. They are looking to kill some game but they have to wait for the rangers to drive away.
Back to the recording studio. It’s full on jam session time now. The singer Rick (Ian Sera) is belting out the lyrics accompanied by his three back up singers, Cathy, Tracy and Sharon. They finish the take but he thinks it stinks. He blames the girls. That doesn’t sit well with them. The four bicker a bit before their manager Brian comes in. He suggests they quit for the day and go spend some time in the woods relaxing .

** Break
** Joel and the bots recreate the scene from the recording studio.

While the Mads like it, Joel declares that “It stinks!”

Rick, Brian and the three girls head for their camper. They open the door and there is another girl. It’s Lara (Susanna Bequer) . Rick forgot he invited her too. Sharon, Rick’s girlfriend is pissed and doesn’t want to go. Brian and Cathy talk her into it.
Meanwhile, Tommy goes for a walk in the woods. He’s looking for more specimens when he spots the cave with the weird eggs.
Back in the camper, it’s all smiles as Brian drives the back roads to wherever.
Tommy heads into the cave and picks up the last egg. As he leaves he sees the dead poacher from earlier. He has some sort of glowing dots on his forehead. Tommy quickly gets out of there.
The band has found a campsite. Rick and Lara are off looking for fire wood. Lara doesn’t think the other girls like her. That’s okay, she just wants to make out with Rick any way. She lays a big wet one on him just before Sharon comes looking for them.
Later they all are sitting around the camp fire eating. Lara decides to tell Sharon what her and Rick were doing in the woods. Sharon throws a drink in her face and Lara storms off into the woods. She stumbles around for a while and gets lost. The two poachers left over from the opening scene find her. They try to grab her but she takes off running. Suddenly she is confronted by the alien from in the cave. She screams and falls off a small cliff. She crashes to the bottom and is unconscious.

The others hear her scream and go looking for her. Before they can get to her the alien finds her and touches her forehead. The poacher guys take off as Rick and Brian reach her. In spite of the fact she has just fall down a cliff they pick her up and move her back to the camper. After covering her with a blanket they try to force some alcohol down her throat. She is out cold though. They decide to try and find a phone to call for help.
Tommy has brought the egg back home and is hiding it in his room.

He goes to bed and puts it under his covers.
The band finds a cabin. It just happens to be the cabin Tommy lives in. They take Lara inside and ask to use the phone but it doesn’t work. Uncle Bill says the lines are down due to a rock slide. Looks like they’re stuck. They put Lara to bed and take turns keeping an eye on her. Tommy’s mom, Molly, makes coffee for everyone. She says there is a ranger station they can go to in the morning. While this is going on, the egg in Tommy’s bed hatches and it’s a little alien.

** Break
** Inspired by the music in the movie, Joel and the bots perform “Music by Some Guy in Space”

The two poachers are camped out for the night and are trying to decide how to get back to town. Just then the alien comes walking up. One of the men tries to offer it food. The other sneaks up behind it and throws a net over it. The alien is too strong. It rips the net and slugs the guy. The other poacher shoots it with a crossbow. The alien just snaps the arrow off and heads off into the woods.
Back at the cabin, Tommy has got some milk for his new friend. He names him Trumpy. He had grow a lot since hatching. Trumpy sucks down the milk. Tommy can’t wait to start playing with him. When Tommy wakes up the next morning Trumpy is even bigger.
Meanwhile, Sharon (Nina Ferrer) wakes up in the room with Lara. Uh oh, Lara’s dead. While everyone is in the room, Tommy gets some more food for Trumpy. Again he literally sucks it down. 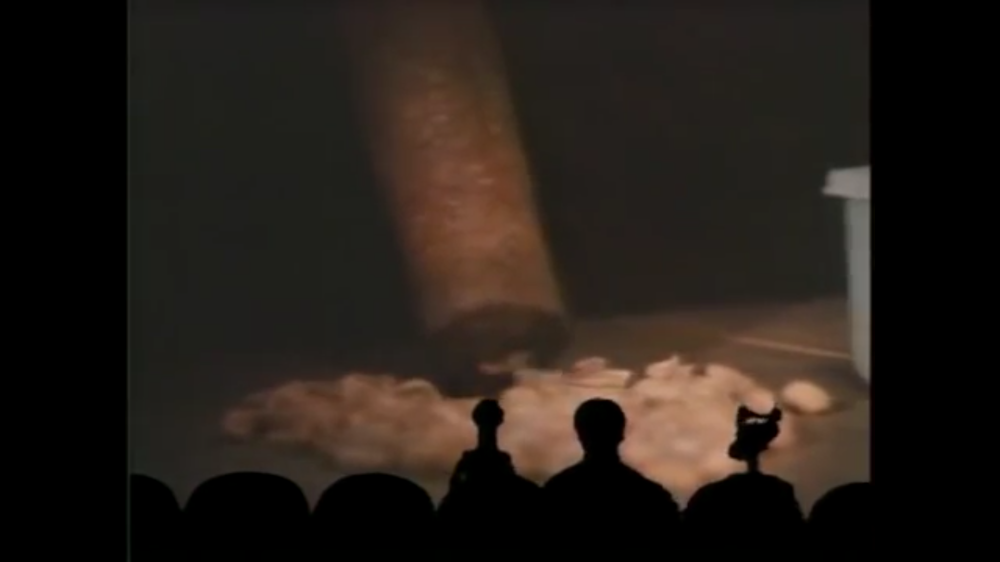 Tommy tries to get Trumpy to play. He doesn’t understand the puzzle so Tommy gets out “Simon”. He demonstrates how to play. Suddenly Trumpy is able to control the game with his mind.
Uncle Bill and Brian decide to try and get to the ranger station. They hop in the Jeep and drive away.
Trumpy starts showing Tommy some of the things he can do with his mind. He makes the lights go on and off, Tommy’s clothes fly around the room and levitate his furniture. Molly makes Tommy come help with cleaning the breakfast table so Trumpy is alone in the room. When Tommy comes back to the room, Trumpy is missing. He searches the house and finds Lara. She has those same glowing dots on her forehead like the poacher guy.
Uncle Bill and Brian make it to the ranger station. Bill’s not taking any chances so he bring his shotgun. Doesn’t look like anyone is there. They check the radio. It’s dead. They look in the back room and find one of the other poachers dead with those glowing dots. As they try to leave the alien is there. He hits Brian (Emilio Linder) and down he goes. Uncle Bill heads for the Jeep but the alien gets to him and smashes his window. He still is able to get away.
Now it’s back to the cabin. Cathy and Sharon are sleeping and Tommy is still looking for Trumpy. The others are starting to get worried about Brian and uncle Bill. They have been gone for hours. Tracy is bored and goes out to the camper. In there she encounters the alien. Tommy sees this and thinks it’s Trumpy. He sneaks outside looking for Trumpy. Uncle Bill makes it back and sees Tracy on the ground. He spots the alien in the trees and starts firing. Rick and Molly come outside to see what all the commotion is about. Bill tells them Brian is dead and some creature did it. Rick is steamed and wants some answers. Molly calms him down and they take Tracy inside.

** Break
** Joel and the bots pretend Trumpy is making stuff levitate around the ship. Dr Forrester and Frank are very confused.

Rick wants to get in the camper and take off with what’s left of his band. Molly again calms him down. They decide to wait it out in the cabin. Rick and uncle Bill are constantly at each others throats. Rick even fires a shot at uncle Bill. Molly again calms him down. Tommy starts knocking on the door. He’s locked out of the house. They let him in and Molly sends him to his room.
Sharon and Cathy finally wake up and Cathy heads off to take a shower. Tommy goes to his room and Trumpy comes out of the closet. Tommy interrogates Trumpy about killing the girl. Trumpy indicates it wasn’t him, that there is another alien. Tommy decides they should run off into the woods and hide. He dresses Trumpy up in a disguise so they can sneak out.
Cathy finishes her shower when suddenly the alien is there and bam, down goes Cathy. Uncle Bill gets off another shot at it but it escapes. Rick and uncle Bill decide it’s time to do a little alien hunting. Tommy hears this and tells them they just want to be our friends. Molly calms him down. Uncle Bill and Rick head out into the foggy night. Just then Trumpy walks into the room. Molly grabs a rifle and takes aim but Tommy stands in the way.

He and Trumpy run out the door. Sharon and Molly pursue them. Now there’s four people out hunting aliens.
The woods are so foggy that everyone gets lost. Tommy literally stumbles upon the bad alien. He hollers for his mom and Trumpy. Everyone hears him and tries to locate the kid. Trumpy gets there first and saves Tommy. Tommy tries to make friends with the other alien. Rick and uncle Bill arrive and try to blast them. The mean alien attacks killing uncle Bill but Rick guns it down. Tommy and Trumpy make a run for it. The other alien disolves into the ground. Tommy decides he and Trumpy can’t stay together anymore. He leaves Trumpy in the woods and runs back to his mother. The remaining characters head out of the woods.

** Joel and the bots start packing things up. They break into a song, “Clown in the Sky”. The mads think it stinks.

Ian Sera appeared in Pieces in 1982

## Best Riffs
## There, now you look like Admiral Perry playing the elephant man.

## And he died as he lived, with his mouth wide open.

This is a terrible movie. And another great movie for the show. The host segments are great, in particular the first one. 5 out of 5