Stranded in Space (aka The Stranger)

** Joel turns Tom and Crow into shooting gallery targets since it gets pretty boring up there.
For the invention exchange Joel takes the old prop gun that says gang when you pull the trigger and makes a prop Uzi. The Mads make a prop harpoon gun. So Joel makes a prop knife. Then the Mads do prop nun chucks. Joel makes prop dynamite. The Mads make a prop dynamite plunger.

Three astronauts are hanging out in their space capsule. There seems to be some kind of minor malfunction with the transponder but ground control doesn’t seem too concerned about it. Suddenly there is a loud bang and the capsule begins to shake and spin out of control.
The camera fades out and we are now in a hospital. One of the astronauts, Neil Stryker (Glenn Corbett), is lying in a bed. A nurse comes in to give Neil some telegrams from well-wishers. Dr. Revere comes in and tells him he is making progress. Neil doesn’t understand why he has had to stay in the hospital for the past two weeks. The doctor explains they need to observe his mental capacities. Then we see that Neil is being watched through a two way mirror. Dr Revere (Tim O’Connor) gives Neil an injection. Neil tells him he has been having strange dreams about his life. He is also very suspicion of the doctor.
Later the doctor is watching Neil from behind the two way mirror. His supervisor, Benedict, is there. 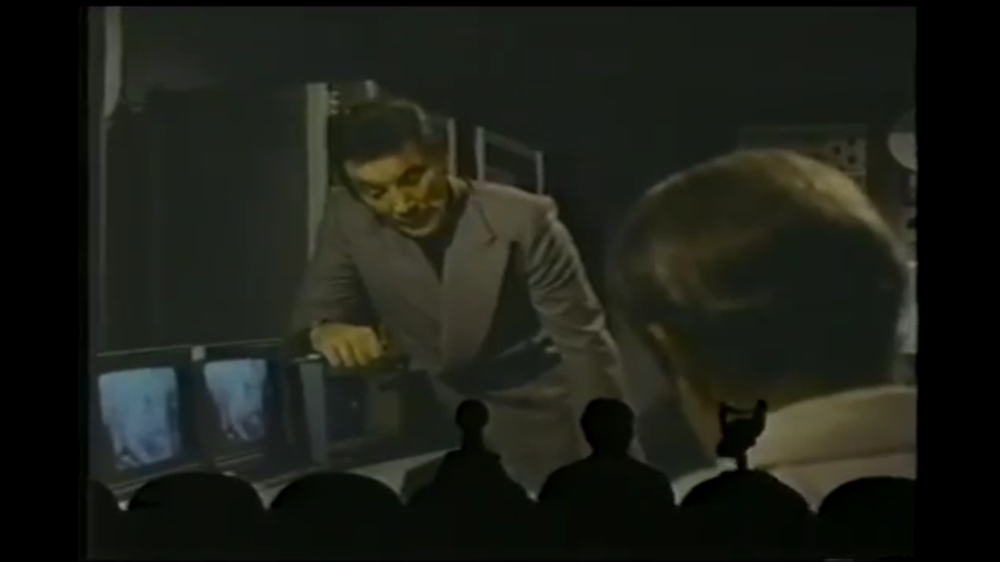 While Neil has been sleeping they have been questioning him to learn more about his past and the space program he is with. Benedict wants to end the questions and take a more forceful approach. They decide to give him another injection but Neil attacks the orderly and tries to escape. Benedict takes a shot at him and security begins searching for him. He hides in an office and another doctor comes in. She tells security where he is but he is able to get away.

** Break
** Tom and Crow are playing with their trading cards. Joel helps them settle a dispute. The trading cards are all of 1970’s TV shows.

Neil finds a phone booth and tries to call Cape Kennedy. The operator has never heard of it or Orlando or Florida. Neil then hitches a ride in a van. While driving he notices that there are three moons in the sky. He realizes he is not on earth.
The next day, Benedict is leading a meeting with the Security Council. He informs them about Neil and that he needs to be found. He also tells them to alert the public a mental patient has escaped. Dr. Revere is there also. The doctor thinks they could learn a lot from Neil. Benedict knows better and reminds the doctor about the perfect order and how great things are and how bad things used to be. Dr. Revere agrees and goes on his way but Benedict thinks he’s lying. He tells his assistant, Henry they need to take him to Ward-E.
Neil is still riding in the van and notices everyone is left handed. The radio in the van comes on and talks about the perfect order. Then they tell of a mental patient that has escaped. Neil realizes that they are talking about him and quickly gets out of the van.
He slips into a book store and asks for a book about the planet. The old shop keeper calls it Terra. He shows him a book but it only goes back about 35 years to the start of the perfect order. There is no more war or famine. Everything is much better now. Neil starts to have some pain in his side. The old man helps him to a room in back of the store where he can rest. He lies down to get some rest. The old man calls for a doctor. Wouldn’t you know it; it’s the lady doctor from when he was escaping. She tells him the Dr Revere can help him and that he should turn himself in. He agrees and she starts to drive him back to the facility. Neil changes his mind and forces the car up a dirt road. He finally convinces her to help him.

Neil and the doctor drive away. She’s tells Neil her name is Betina Cook. They drive to a farm and meet Professor Dylan MacAuley. The professor fills Neil in about Terra and the perfect order.
Benedict is called before the head council. They are concerned about Stryker’s escape. Benedict assures them he will be captured. They let him know he had better get him.
Benedict and Henry (Steve Franken) know Neil is with Dr. Cook but they can’t seem to find her on any of their surveillance cameras. They figure she must be hiding with someone they don’t know about. Benedict goes to Ward-E and tries to get some information out of Dr. Revere, whom they had sent there earlier, but he seems to be in a catatonic state.

Neil and the professor come up with a plan to get Neil back to earth. Terra is scheduled to launch a rocket of their own the next day. The plan is to swap Neil out for one the astronauts at the last minute so he can take the ship back home. The professor has a medical condition and when it flares up he hurriedly gives himself an injection. When Betina (Sharon Acker) realizes she isn’t going to see Neil again they share a passionate kiss.
Betina heads home. When she arrives Benedict is waiting for. He and Henry take her away for questioning.
Neil and the professor are able to get to the launch site. They head to the old man’s office and go over the plan. Suddenly the professor needs another shot but he drops the syringe. He’ll have to go back home to get another because there is no way anyone on the base would have any medical supplies.
Back at home, he shoots up and then there is a knock at the door

. It’s Betina and she was been beat up. Benedict (Cameron Mitchell) and his men roughed her up to try and figure out where Neil is but she didn’t tell them. She wants to see Neil again and tell him that she loves him. The professor (Lew Ayres) says no. She drives away in a huff.
At the launch site, Neil is waiting to change places with one of the astronauts. One of the medical personal recognizes him. Neil grabs a nearby letter opener and forces him outside. He gives him one good punch and knocks him out cold, then stashes him in a dumpster.

** Break
** Joel is playing a villain and Tom and Crow are his henchmen. He sends each of them off to kill TV stars from 70’s cop shows but Tom and Crow get confused by the jargon and are not sure what to do.

Professor MacAuley starts heading back to the base. He’s being followed. It’s Betina. And she’s working with Benedict. She calls him on the radio and tells him where they are headed.
At the base, Neil makes his move. He talks his way passed a guard, gives him a karate chops and steals his gun. It time to make the switch.
Professor old guy gets back to the base. Betina catches up to him. She gives him the sob storyline again and he relents. Benedict and Henry hurry to the base. Benedict tells Henry he may have to take his place soon if they don’t catch Neil. Neil has tied up the other astronaut when the professor and Betina arrive. The professor keeps watch as Neil and Betina say their goodbyes. Benedict and his team arrive. They find the professor and gun him down. Neil makes a run for it and the chase is on. The bullets fly as they run through the underground piping corridors. Neil is able to put one in Benedict’s arm but they finally corner him. Neil notices a bunch of liquid oxygen vessel. As he jumps over a retaining wall into the ocean he shoots the tank and it causes a huge explosion. Benedict finds Betina and tells her she did the right thing for the perfect order. Henry thinks Neil died in the explosion but Benedict tells Henry to get proof. But Neil didn’t die.
He crawls out of the water onto a beach. Suddenly there is a man with a flashlight shining in his face. Neil tells him his boat capsized and he swam to shore. The man and his family offer Neil a ride up the coast.

** Tom is a movie executive and Crow and Joel try to sell him on the movie they just watched as a TV show. Tom ain’t buying it. Dr. Forester tries to tell Frank that he might have to take over for him some day. Frank has no idea what he is talking about.

Glenn Corbett is best know as Lincoln Case on the television series Route 66.

Tim O’Connor played Dr. Elias Huer in Buck Rogers in the 25th Century as well as guest roles in many TV shows,  including Barnaby Jones, Dynasty, The A-Team, Star Trek: The Next Generation, Dukes of Hazzard and M*A*S*H.

Sharon Acker made guests appearances on The Mod Squad, The Streets of San Francisco, Quincy, M.E., Simon & Simon and Murder, She Wrote among many.

Lew Ayres played banjo and guitar for big bands in the twenties before staring as Paul Bäumer in All Quiet on the Western Front in1930. He also played Dr. Kildare in several films from 1938 to 1942.

Steve Franken appeared as the drunken waiter Levinson in The Party, alongside Peter Sellers in 1968. He is also the cousin of Al Franken. This was originally a pilot for a TV show that never got made. Watching this you can see why. It’s very dull.
Episode wise this is a good one. 3 out of 5.