Time of the Apes 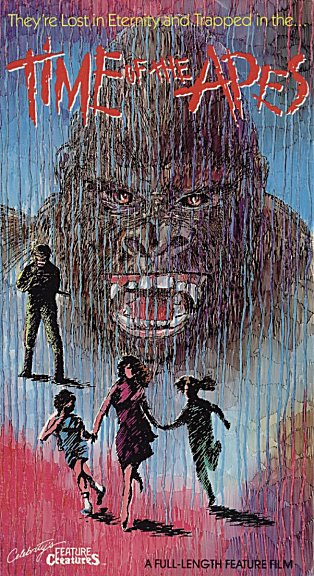 ** It’s baseball season on the Satellite of Love and Joel turns Tom into a batting tee. He hits the ball and puts a hole in the ship’s hull. Gypsy has to patch it. She scolds them for playing ball in the house. As soon as she leaves Joel hits it again. This time Crow catches it.
For the Invention Exchange Joel invents the cellulite phone which reminds you to stop dialing and start dieting. Frank invents Miracle Baby Growth Wonder Formula. It turns a toddler into a full grown man in seconds.

Little Johnny is having some breakfast with his mother. His father comes to join them. There is a knock at the door. It’s Caroline. She and Johnny are going to visit his uncle at his laboratory. Suddenly there is a mild earth quake. Johnny’s parents want him to stay home but he doesn’t care and is determined to spend some time with his gal pal, so he and Caroline head off anyway.
At the lab they meet up with Catherine, who shows them around. Johnny’s uncle shows up and he takes them to see the cold experiment they are working on. They are cryogenically freezing monkeys. He thaws one out to show them how simple it is. They have even done this with people. Catherine takes the kids to show them the chambers used for humans. Uh oh, the nearby volcano starts erupting and everything in the lab beings shaking. The three hide in some of the freezing chambers as the building starts crumbling down around them. Wouldn’t you know it, a boulder hits the control lever and our heroes are put into a deep freeze.
The three wake up on some exam tables in the same room. They start looking around the facility but nothing seems normal. They open a door and suddenly there is a bunch of apes in lab coats. Of course this freaks them out and they take off running. It’s no use as the apes capture them and tie them to a tree.

What appears to be the head ape comes along and has them blindfolded. They are then taken to a desolate area with a bunch of human bones lying around. The three decide to make a run for it. Despite the fact the apes have guns, did I mention before they have guns, well anyway, the three manage to get away. They find a house and slip inside. There is a young ape in there but it is not afraid of them.

** Break
** Joel and the bots show some clips from the film and ask “why doesn’t Johnny care”?

Soon the apes find them and chase them some more. When they pass by some sort of statue the apes stop dead in their tracks. Apparently our heroes are heading towards Green Mountain,  which scares the apes. More soldiers are called out to look for the humans. Johnny, Caroline and Catherine continue running through the mountainous jungle. They get past a couple of traps before Caroline gets caught in a net. Johnny climbs up the tree to try and cut her loose. Suddenly there is another human and he has a gun. His name is Godo. He also has a knife so he cuts Caroline down and takes them to his home. It’s a lovely cave in the mountains. Godo does not remember seeing any other humans yet he seems to be able to converse easily with our trio.
The apes continue the hunt. Most of them are very afraid but their commander keeps pushing them onward.

Godo decides to shave off his beard to look more civilized and to impress Catherine. Just then the little ape from earlier comes in. It’s name is Pepe and it warns them that the apes are getting close. Godo runs off with his rifle to see what he can do. The apes have set some fires to try and smoke them out. Godo and the apes exchange some gun fire but the smoke forces him and the others to make a run for it.

It’s no use as the apes are able to corner them.
The apes are well aware of Godo and prepare a firing squad to finally kill him. At that moment the top ape shows up. He orders the execution stopped. Godo tries to rush him but the ape stops him with a crushing blow to the head and down goes Godo. For some reason a flying saucer appears in the sky just then. Not the least bit interested in it, the head honcho orders all of the humans to be brought back to headquarters. He tells Catherine that as long as they cooperate they will not be harmed.

** Break
** Joel and the bots do a dramatization of the scopes monkey trial with Gypsy as the defendant and a cardboard cutout if Judge Wapner presiding.

The apes put Godo in an electrified escape proof room while the others are put in a room by themselves. Pepe somehow gets into the facility. Pepe crawls through the air vents to the trios room. Pepe and Johnny then crawl around until they find Godo. Just then then commander ape comes in their room. He has waited a long time to take out Godo and prepares to shoot him. 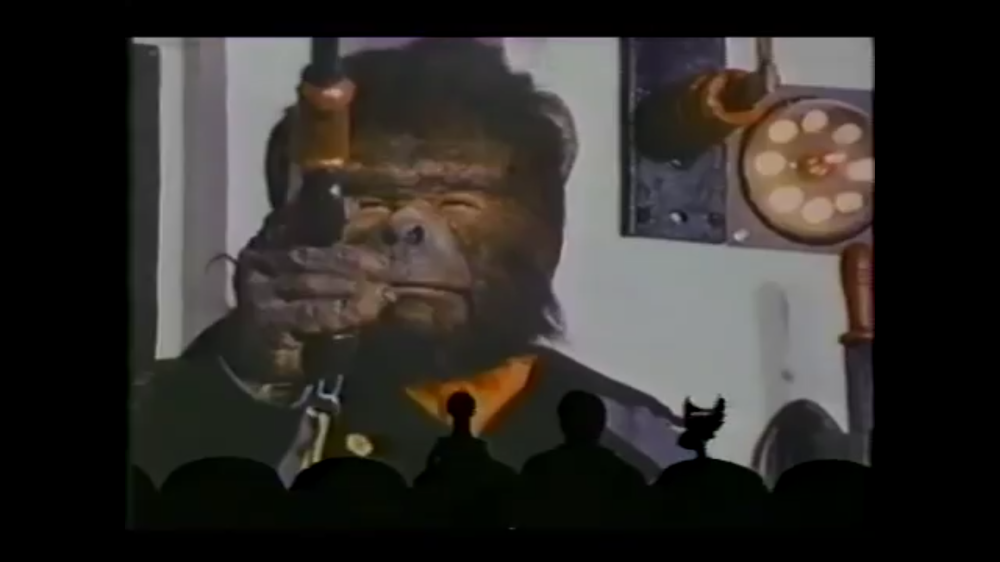 He turns of the electrical field and walks toward Godo. That’s when Johnny drops down out of the vent on to his back. Godo beats the tar out of the commander and the three of them make their escape. They hide out in the back of a truck until some soldiers hop in with them. The truck drives into town and the three are able to slip away. Meanwhile the apes interrogate Caroline and Catherine to find out where the others have gone but they have no idea.
Godo, Johnny and Pepe start working their way back to the base to rescue the girls. Along the way they see the flying saucer from earlier. It seems to be taking pictures. They are not sure what the make if it. Is it watching over them or what?  Anyway, they continue on toward the base. They sneak in and get to the girls and a tearful reunion ensues.

They all escape but are soon surrounded. There is that flying saucer again. This time the apes decide to blast it out if the sky. The saucer emits some kind of ray which renders all of their guns useless. Our heroes are able to get to a jeep drive away. The flying saucer makes another visit so they decide to follow it to try and contact it.
First they take Pepe home to her mother. That’s right; Pepe was girl ape the whole time. Later they run into the ape commander again. He and Godo engage in a serious firefight. Oh no, Godo is out of bullets.

** Break
** Joel and the bots put on a mock newscast. Crow has the fashion minute complete with clips of all the clothing worn by the apes in the movie.

The ape commander is ready to finish off Godo, when the flying saucer shows up again and disables the commander’s gun. He pleads with them to let him kill Godo. He claims Godo killed his wife and son. The saucer lands and shows a video of Godo trying to save them. The commander is devastated by this and wanders away in shame. The top ape shows up and tries to convince the humans to come back with him but they decide to move on.
They work their way through the mountains and see the saucer land behind a rock formation. They try to find it but only find a metal door in the mountain.

The door suddenly opens so they go inside. It closes behind them forcing them to deeper into the mountain. A funky light show starts and just like that, Caroline wakes up in a bed in some strange room. She opens a door a steps out into the hallway. She starts searching for the others. She and Catherine find each other and try to figure out what the hell is going on and what to do next. Just then several figures appear at the end of the hallway. They’re worried it the apes again but it turns out to just be several human scientist. They are back at the lab. They were cryogenically frozen the whole time. Catherine asks about Johnny and Godo. Johnny is in the other room they tell her but they don’t know anything about someone named Godo. Catherine finds a pendant Godo was wearing in one of the freezing chambers. Caroline and Johnny are then reunited with their parents.
Dr Lee, one of the scientists, tells Carolina that it took seven days for the rescuers to get them out of the lab. Caroline tells them about all that happened to them and that it had all lasted 6 months. Dr Lee gives her some mumbo-jumbo explanation above cold temperatures and time shifting to make sense of it.
Later, Catherine is out with the children. They want to know what happened to Godo. Catherine tells them he is on another time line but will always be in their hearts.

** Joel and the bots sing the Sandy Frank song. Dr Forrester and Frank are trying to decide who should push the button and who should change the giant baby’s diaper. The baby pushes the button. ## The King of the Apes rides in style in a new Buick Skylark. Not a great episode. This was originally a Japanese TV show and was turned into a movie for American audiences to try and capitalize on the popularity of the Plant of the Apes movie. The movie is really bad and a little difficult to get into. 2 out of 5.