** Tom and Crow can’t stop talking like Lucille Ball. Magic Voice gets in on it also.
Dr. Forrester and Frank invented printers that you wear that show everyone what you’re really like. Joel made a fax machine that uses tissues as paper.

A news reporter says Gamera has returned after two years and has gone into an erupting volcano. Everyone is waiting to see what happens next.
Meanwhile a board meeting is underway. The new expressway, which runs near the volcano, is behind schedule and the boss wants to get things moving. He calls the foreman, Shiro Tsutsumi to get some answers. He doesn’t care about the volcano or the villagers that won’t sell their land; he just wants the job done. Shiro instructs his crew to get back to work.
A helicopter full of officials is flying over the volcano when suddenly a laser beam starts shooting out of the area. It hits the helicopter, splitting it in half.

Nobody is sure where the beam came from but that’s not something Gamera normally does.
Shiro and some of the construction works run into a road block on their way to the job site. The farmers that have been holding out put it up and they come out to confront the men. Shiro tries to talk to them but they tell him wear to put it. A lady rides up on a bicycle and gets in the middle of the squabble. She convinces Shiro to take his men and leave. Meanwhile a local reporter has ridden into the area looking for information about the laser that took out the helicopter.
Turns out the farmers are just disrupting the construction with the hope of driving up the price for their land. The construction crew notices a glowing light coming from a nearby mountain. They go and investigate. The reporter also sees it. He runs into a little boy that shows him a way up the mountain. They find a cave with a glowing light coming from it. They head inside. They see something in the distance but before they can get a closer look the cave starts to collapse. The reporter high tails it out of there leaving the kid on his own.

Reporter guy gets out safely but is then eaten by a large creature, aka Gaos. The kid eventually also gets out of the cave and runs into Gaos. Gaos has him cornered when out of the blue, Gamera shows up as well as the construction workers. Gaos snags the little kid then turns to face Gamera.

** Break
** Joel tries to demonstrate how to make a construction paper version of Gaos but Tom and Crow keep interrupting.

Gaos blasts several laser shots at Gamera seriously injuring his arm. Gamera rolls up on Gaos but he swats him away. In the process he drops the little boy on top of Gamera. The great turtle breaths fire at Gaos. The construction workers are watching the events unfold transfixed with fear.
Gaos backs off and Gamera, with the youngster on his back, flies away. He flies back to the village and the boy, Eiichi, is able to climb down to safety. Done being a hero, Gamera flies away. 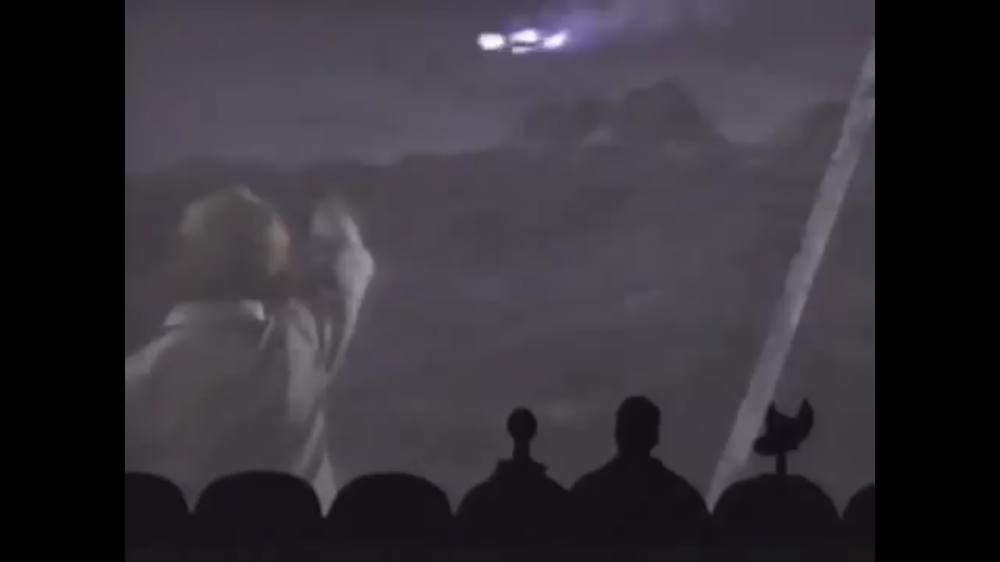 Eiichi is brought to a meeting of scientists and military personnel. They discuss Gaos and what they can do to destroy him. The military sends in a bunch of planes to try and bomb it but Gaos shots them down with his laser ray thing. Meanwhile Gamera is hiding out while his injured arm heals.
All the farmers’ cows and horses run away in the middle of the night. They seem to be spooked by something. It’s Gaos again. The next day the village leaders meet to decide if they should sell or not. They decide to let Eiichi’s grandfather negotiate for them. Meanwhile the scientists figure out that Gaos is nocturnal.

** Break
** Joel and the bots try to do a play based on the movie but with a Viking theme. Movie sign goes off before they can hardly get started.

Shiro (Kojiro Hongo) and a couple of the construction guys are still near the mountain so they keep watch for Gaos. Sure enough he pops up. The military opens fire on it with a bunch of tanks. Gaos flaps his wings and creates a huge gust of wind which blows everything away. He then flies into the city wreaking havoc.

About this time Gamera finally shows up and a big fight starts. The sun starts to come up and Gaos breaks off the fight and heads for cover but not before Gamera bites off a couple of Gaos’s toes.
The scientists run some test on the toes and discover Gaos has a weakness. They come up with a plan to get rid of Gaos. If they can get him spinning around until the sun comes up, the UV light will do him in. They decide to use a rotating building to do the trick. They make some synthetic blood to try and lure Gaos into the trap.

** Break
** While Crow plays Ed Sullivan, Joel and Tom put on a plate spinning act that doesn’t go so well.

That evening Gaos comes out as expected. He starts flying around with such speed that he generates a tremendous amount of wind. Eventually he catches sight of the large amount of blood that the scientists set out in a huge bowl. 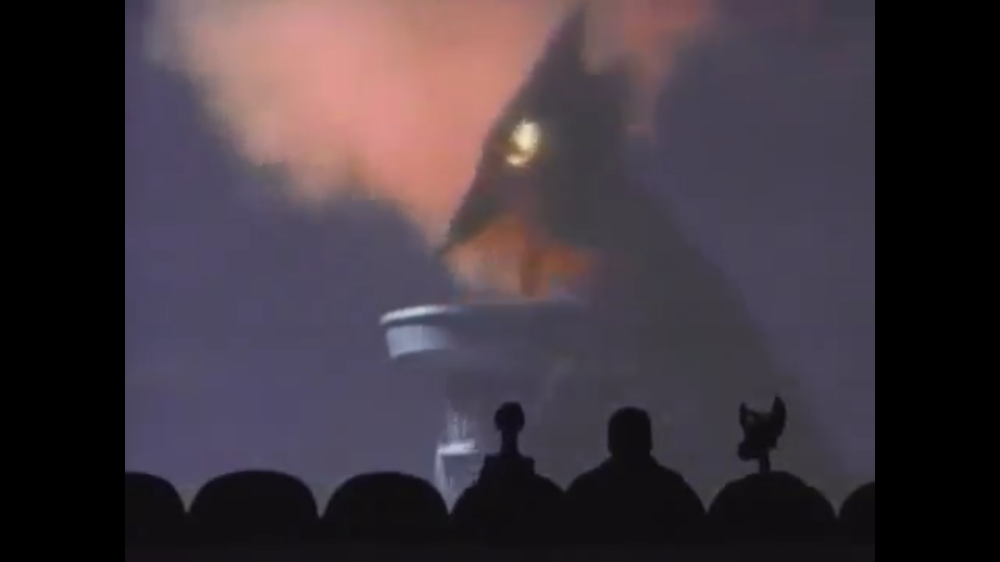 Mmmm that’s good blood. Then the building Gaos is on top of starts rotating. This makes Gaos very dizzy and unable to escape. Oh no the power is starting to fail. Eventually the substation burns up causing the building to lose power and stops the rotating platform just as the sun comes up. Gaos is now really pissed off. He bashes in the building before flying away.
The villagers find out that the road is going to be moved to a different location. They are mad at Eiichi grandfather for telling them to hold out for more money. Now they are getting nothing. They demand that the old man do something about. Eiichi gets very upset and yells at the men the leave gramps only. They all feel ashamed for being so mean and leave. Eiichi then explains that Gamera would come back if they could build a large enough fire and it would weaken Gaos as well. The old man lets the powers that be know that they can burn the area around the villagers.
The construction crew gets to work cutting down trees and starting a fire. Gaos keeps putting out the flames but Gamera does eventually make an appearance. Then the final battle begins. Gaos blasts away at Gamera but the plucky little guy has learned from the previous fights not to stay in one place. Just when it seems that Gamera has the upper hand Gaos turns the tables. He picks up Gamera and drops him hard against the ground several times. As a last gasp Gamera throws a boulder and it lodges in bird boy’s mouth.

Gamera then slams into Gaos and bites him in the neck. The sun starts to come up. This weakens Gaos even more so Gamera drags him into the volcano killing him. As Gamera flies away everyone celebrates.

** Joel and the bots try to come up with better ways of getting rid of Gaos, each one more outlandish than the next. Dr. Forrester and Frank have a few off their own.

Kojiro Hongo: This is his second appearance on the show having also stared in Gamera vs Barugon in episode 304. Best Riffs
## Whoa, Cross-check, he’ll be in the box for two.

## They must be at Six Flags over Osaka

## The chief is calling you.
What, Sitting Bull? I’m not a big fan of this episode. The movie is really dull and hard to watch but the riffs save it some. 2 out of 5.