War of the Colossal Beast

(With the short “Mr B Natural”)
** Joel and the bots mix up some prefixes and suffixes with some Mexican food names to come up with some interesting food ideas.

The Mads invention is the breakfast bazooka. Joel’s is the snack mortar.

We first meet Mr B Natural, whom is a musical note that then assumes human form.

He tells us about a student named Buzz. Buzz is a shy twelve year old that wants to be liked. When a girl asks him to come over to listen to some records and dance he turns her down. He says he has to study but really it’s because he sucks at dancing. Buzz goes home feeling pretty bummed out. Mr B Natural visits him in his room. Buzz would really like to learn to play music and Mr B Natural is there to help. Mr B then demonstrates how instruments do more than just play music. They let out what’s inside you.

Buzz decides he wants to play the trumpet so his parents take him to the music store. The store clerk gives the family a little background on how a good trumpet is made. They get the horn. Buzz joins the band and quickly becomes the coolest kid in school.

** Crow is sure that Mr B Natural was a women while Tom completely disagrees. Joel acts as moderator while the two of them have an animated debate.

War of the Colossal Beast

A young Mexican  boy is driving a pickup truck very erratically on some dirt roads. He keeps glancing behind him as if he is being followed. He drives into a small pond and gets stuck. He hops out and starts to run but keeps falling in the water.
An American man pulls up to a police station in a small Mexican town. The man, Mr Swanson, wants to report a stolen truck.

It seems he hired the boy to drive his truck to this town but he hasn’t showed up yet. He was supposed to arrive yesterday. The officer asks for a description of the boy. He then takes the man across the street where the wayward driver is laying in a bed and being tended to by a doctor. Miguel, the boy, is in shock and unable to speak.

Officer Murillo takes the man to where they found Miguel. Sure enough it’s right whet we left him in scene one. There are tire tracks in the mud but no truck.

In Los Angeles, Joyce Manning, is watching the news on her tv. She sees a story about the Mr Swanson and his missing truck and it gets her attention. She contacts him by phone and he comes to her place for a meeting. Also at her home is Major Baird.

The major and Joyce pump Swanson for information about the disappearance of his truck. Seems Joyce (Sally Fraser) is convinced that her brother is the truck thief. Her brother is of course, Lt. Col. Glenn Manning from episode 309, The Amazing Colossal Man. We last saw Glenn fall from the top of Boulder Dam to his death or did he? After Mr Swanson leaves, the major tells Joyce to give it up, her brother is dead. Then he asks her to dinner. She says no and instead heads for Mexico to see if the boy from scene one can help her.

She finds Miguel and he is still in pretty much the same shape as before. Joyce stays with him through the night. He wakes up in the middle of the night screaming about a giant. Looks like Joyce may be on to something.

The next day Major Baird arrives with a scientist, Dr. Carmichael. The three of them, along with the officer Murillo, head out to the infamous disappearing truck site.

They find a giant human foot print near the site. Looks like Glenn was heading for the nearby mountains.

** Joel has the big head out again. He and the bots are singing when they hear a knocking coming from outside the ship. It’s Glenn from the first movie. He’s a little ticked off that he is not in this movie. He decides to just hang around the ship for a while.

Following the footprints they drive into the mountains. They find a beat up truck but it’s not Swanson’s. With it getting dark they head back to town for some grub.

Major Baird (Roger Pace) makes a call and is able to get some troops to take down the colossal man. Joyce convinces him to let her try and talk to him first if they can find him. Since the men won’t be there until tomorrow the two of them set off to find her brother. They climb up the mountain they were at before and find a whole bunch of trucks including Mr Swanson’s. It appears Glenn has been raiding them for food. Suddenly, there he is! He is just as tall as ever but not looking too good. He has another truck but when there is no food in it so he tosses it away and walks off.

Back at the police station, Dr Carmichael has a plan. They bake a bunch of bread and lace it with some drugs to knock out the big galoot. Joyce isn’t too thrilled about it. The major tries to talk her into going home to San Francisco but she ain’t having it.

The Major, Dr Carmichael and Murillo drive a truck full of bread around the area to try and find Glenn. Sure enough, Glenn takes the bait. The drugs take effect and down goes Glenn.

Now that they have him, they try to decide what to do with him. Seems none of the government agencies want to take responsibility for him. When the plane he is on tries to land in Los Angeles the mayor won’t let them. I guess he doesn’t want Glenn to go rampaging through town. The army finally persuades the mayor to let them stick Glenn in an unused hanger until they decide what to do with him.

They have him strapped down inside the hanger as the drug wears off. He grunts and strains against the restraints. They try to communicate with him but he doesn’t seem to even know his name. Eventually he is able to break free.
He crawls out of the hanger and starts strolling around the airport.

After tearing up a few things they shoot him with a tranquilizer and recapture him. This time they really tie him down. Dr Carmichael (Russ Bender) wants to try and run some tests on Glenn to see if he has lost his memory or actually lost parts of his brain. The next day they set up for the tests.

** Joel plays a newscasters from KTLA with predictions for the future.

They show Glenn a bunch of pictures hoping to jog his memory. When they don’t seem to work, Joyce tells him about some of their childhood experiences, but Glenn just grunts and groans.

Running out of options they decide to take him to an uninhabited island so he can roam free without scaring everyone. They make the arrangements for the next morning. Major Baird visits Joyce to give her the news.

Unbeknownst to everyone, Glenn has figured out a way of getting out of his restraints. He brakes free, kills Dr Carmichael and goes on the lamb. In the dark he is hard to find. After a long search he is spotted in Griffith Park. The army sets up a road block and turns on a group of search lights.

A group of school kids are just getting on their bus after a trip to the observatory. Just as the last two are boarding, Glenn comes strolling out of the trees. The army sees him and shine the lights in his face. Glenn starts to freak out and picks up the bus. Joyce hops in a jeep and drives up to the observatory. She convinces Glenn to put down the bus. He finally remembers Joyce and is very sad. He starts to walk away but abruptly stops. He grabs ahold of some high voltage power lines and electrocutes himself. ** Joel has a big box of bread. He gives some to Tom and Crow and tells them he put some drugs in it to knock them out. Just kidding.

Joel reads a letter, then Glenn reads one. Dr Forrester fires some waffles at Frank from the bazooka.

This is the third time we have seen Sally Fraser. She was in episode 313 Earth vs the Spider and episode 311 It Conquered the World.

Roger Pace appeared in a few tv shows after this movie but nothing else. 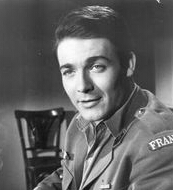 Russ Bender also appeared in Earth vs the Spider and It Conquered the World.

## Am I hip yet? When do the chicks start comin’ around? ##”Tell the pilot to circle the field once more.” The movie’s not quite over.

##I’m a lineman for the county.

## The swimming portion of the truckers triathelon begins. Mr B Natural maybe one of the weirdest things on film but the feature is kind of weak. 3 out of 5