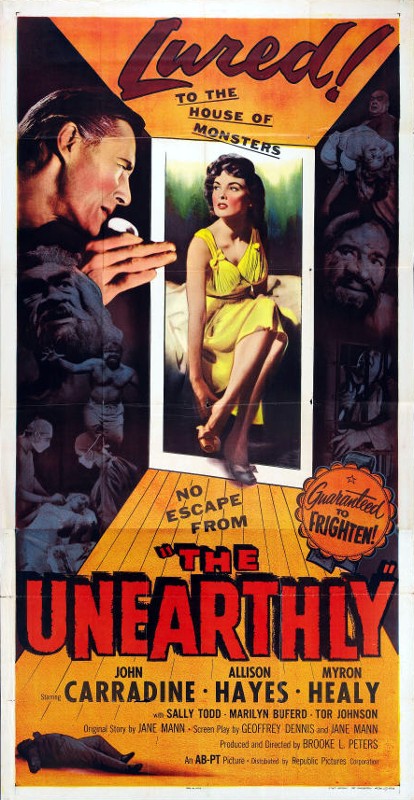 (with the shorts Posture Pals and Appreciating Our Parents)

The bots are making a “spontaneous” video for America’s Goofiest Home Movies but it doesn’t go so well. In fact, Crow is in really bad shape afterwards.

Dr Forrester comes up with a myriad of pills based on the phrase “That’s a hard pill to swallow”. Joel and the bots made celebrity inspired items, like Emilio Esta-pez and a Jackie Mason-jar.

The students in Miss Martin’s class are learning about good posture. Tommy, Jim, Jane and Mary all want to have good posture and hope to win the class posture competition. Miss Martin gives them some pointers after class and the four of them help each other out through out the week. They of course go on to win the contest.

Tommy is a young boy looking around his neatly organized room. His room was a mess when he left for school. The kitchen is all cleaned up too. He starts wondering how that happened. Then Tommy’s father comes home from work. He gives Tommy his allowance and he even gives his mother a few bucks. Later Tommy overhears his parents talking about all the things they did today. Tommy realizes his parents do a lot and his family is just like a team. Tommy starts keeping his room clean and helping out with chores around the house. His father gives him a larger allowance and everyone lives happily ever after.

** Crow and Tom are thinking about how the ship always gets cleaned up and all the other jobs get done. Turns out it’s Gypsy that does all of them.
The Unearthly

A car pulls up to a large home late at night. The home belongs to Dr. Charles Conway. In the car are his associate, Dr. Loren Wright and a patient, Grace Thomas. Grace is suffering from depression and Dr Conway says he can help her. After some pleasantries, Dr. Sharon Gilchrist, Conway’s assistant, shows Grace to her room. When they leave, Dr Wright tells Conway that he will make it appear that Grace committed suicide so no one will come looking for her.

Wright asks Conway to show him how the experiments are going. They take a look at his most recent patient, Harry Jedrow. Conway is trying some sort of glandular experiment on his patients against their will. This patient is catatonic. The two of them leave the room and Lobo, Conway’s brutish helper, comes to give the man a sponge bath.

Conway goes to Grace’s room to see how she is doing. She gives him a little background on her condition. He tells her he can help but to only speak to him about anything.

Later that night, Lobo finds a man snooping around outside the house. Turns out he is Frank Scott, an escaped bank robber and murderer. Rather than turn him in, Conway let’s him stay in exchange for his help. What help that will be he’ll decide later.

The next day, Frank meets two other patients having breakfast. Danny is being treated for anger issues while Natalie is recovering from a nervous breakdown but is close to going home. When Danny starts acting aggressively he is taken away for another treatment.

** Joel wants to talk about some of the great movies John Carradine has been in but Tom and Crow just want to talk about Tor Johnson and his great acting ability.
Conway (John Carradine) tells Frank about his experiments and how they can prolong life. He wants Frank to be his next test subject but Frank tells him noway and says he will be leaving. Conway reminds him about the police looking for him. Looks like Frank (Myron Healey) will be staying after all.

Out by the pool Frank sees Natalie and Grace. Natalie goes to see the doctor so Frank strikes up a conversation with Grace. The two of them decide to take a stroll around the grounds.

Dr Gilchrist checks on Jedrow. He is still in the same catatonic condition. She and Conway are not sure what to do about him. Just then Dr Wright calls. It seems Jedrow has a sister that is trying to find him. Conway tells him to tell her he is dead. Gilchrist doesn’t quite understand why since he is still alive.

At that moment, Natalie arrives to see Conway. He tells her she just needs one more treatment and she can go home.

That night after diner, Frank and Grace (Allison Hayes) begin to wonder what happened to Natalie. Gilchrist tells them she ate diner in her room and didn’t want to be disturbed. In reality she was drugged by Conway. Lobo carries her down to the basement laboratory. After everyone else has gone to bed, Conway and Gilchrist (Marilyn Buferd) start operating on her. They surgically implant a new gland in her.

All the while Frank has been nosing around. He looks in Natalie’s room and finds all of her things but she is missing. He tries to warn Grace that Conway is crazy but she isn’t buying it.

As a last step in the operation on Natalie, Conway and Gilchrist give her a blast of electricity. The lights in the house flicker and all of the other patients notice a strange sound. Eight hours later the doctors check on her condition. She is stunningly disfigured. Conway is devistated by this latest setback.
The next day Conway sees Grace and Frank walking together. He takes her aside and tells her Natalie was released and left early in the morning. He also tells her that Frank is suffering from a persecution complex and she should stay away from him. Gilchrist overhears their conversation and doesn’t like the way Conway was sitting so close the her. She confronts Conway about his behavior. It seems the two of them are couple. She wants to make Grace their next experiment.

Frank starts doing a little more meddling. He works his way down to the basement and finds Jedrow. He hurries back upstairs to retrieve Gloria to show proof that Conway is crazy. When they get back down to the basement Jedrow is gone. They start searching for him but instead find Natalie (Sally Todd). Frank takes Grace back to her room and has her lock the door behind him when he leaves.

**  Joel and the bots try to play a board game but don’t have all of the pieces for any of them. Instead they combine them all into one big game. It takes so long to read the instructions that they never get to play the game.

Frank heads back out and sees Lobo carrying a coffin out the front door. Lobo lowers the casket in to a grave and begins burying it. For some reason Danny (Arthur Batanides) is outside sneaking around. When a dog starts barking at him Lobo goes to investigate. Danny slips back into the house before Lobo can find him. Frank meanwhile opens the coffin. Jedrow is in it and he is still alive. Lobo returns and finishes burying the coffin.
Back in the house, Frank goes to Danny’s room and convinces him that he is in danger. They agree to meet at 2 am along with Grace to try and get out. Conway does a little look in on all of the patients. Luckily they are all pretending to be asleep. Conway is really stressed out so Gilchrist tries to comfort him but he is not very well receptive to her kindness.

At two o’clock the three inmates meet by the front door. Just as they are about to leave Conway, Gilchrist and Lobo surround them. At gun point they take the men downstairs but Conway take Grace with him so he can perform surgery on her. Gilchrist leaves Lobo (Tor Johnson) to gaurd Danny and Frank. They jump Lobo, but not before he shoots Danny in the gut. Frank takes the gun, heads upstairs and find Conway in his office. He holds him at gun point and reveals he is actually Lt. Houston, an undercover police officer. Conway steps on a secret button that turns out the lights and is able to escape out a hidden door. Houston finds a phone and calls the police for backup. They arrive and help in the search for Conway. Conway makes his way outside with Houston close behind. He sneaks back into the house to get the keys to his car. He turns around and suddenly Jedrow is there with a knife. He stabs Conway who collapses on the floor. Lobo  makes it back up stairs and hits Jedrow over the head. Houston and the rest of the police subdue Lobo and find Gilchrist. They free Grace from the operating table and locate Danny, dead in the basement. They also find a cage full of deformed people Conway had experimented on.
Houston tells the other officers to go and arrest Dr Wright. Grace realizes that Houston was really a cop. The two of them share an impassioned kiss as the movie ends.
** Joel and the bots start talking in street slang like the way Danny did in the film. Even Frank and Dr Forrester get in on it.

John Carradine was know as much for his voice as his acting ability. He is most famous for his roles in The Grapes of Wrath, The Man Who Shot Liberty Valance, and Stagecoach. 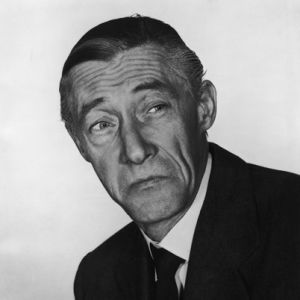 Myron Healey appeared in some 140 films, many of them westerns, including Rio Bravo and True Grit. 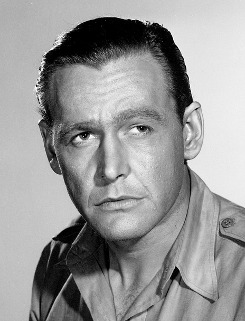 Allison Hayes was a contestant the 1949 Miss America pageant and stared in the title role in Attack of the 50 Foot Woman. She later developed lead poisoning and leukemia before dying in 1977 at 47 years old. 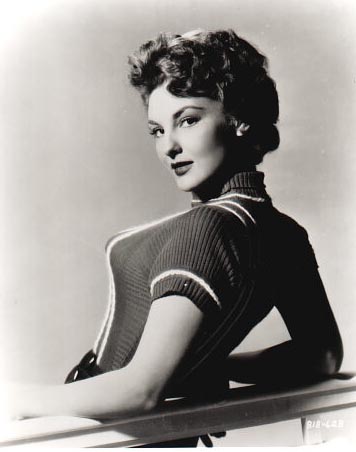 Marilyn Buferd was the 1946 Miss America winner. She appeared in several B-Movies through out the 1950’s. 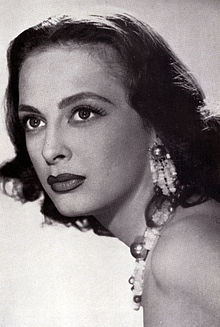 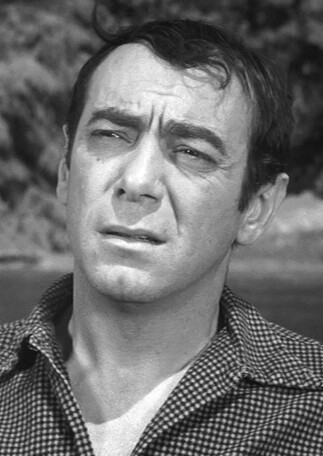 Sally Todd was Playboy’s Playmate of the Month in February 1957 as well a appearing in many B movies through out her career. 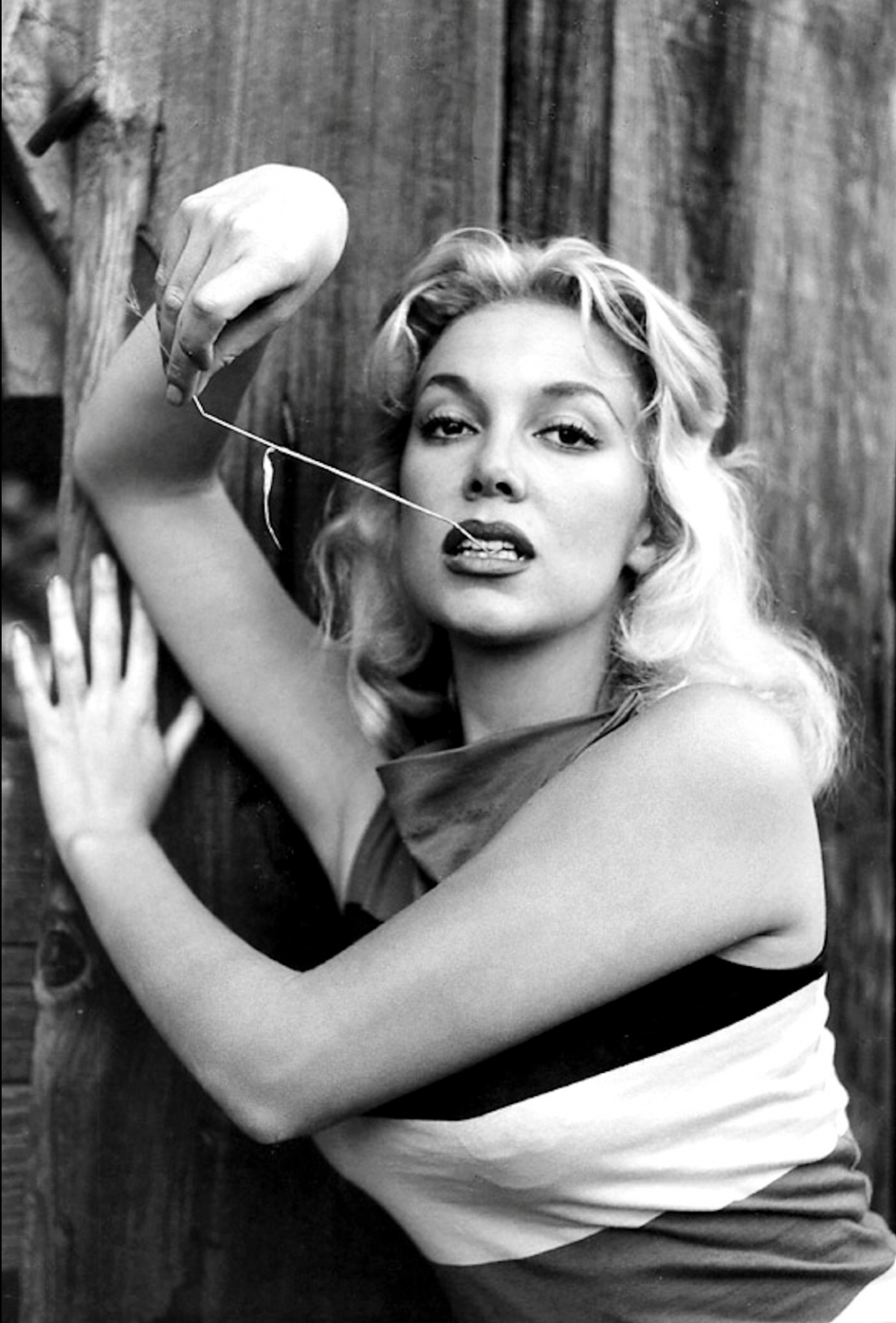 Tor Johnson made a career out of playing large brutish characters. He appeared in several Ed Wood films. 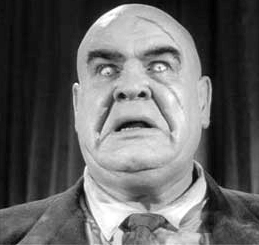 ## A Briggs and Straton breathalyzer ## A playground where apes evolved from men!!! This is an average episode. The shorts are really dumb and so is the movie but at least it has a plot to follow. 3 out of 5