Attack of the Eye Creatures 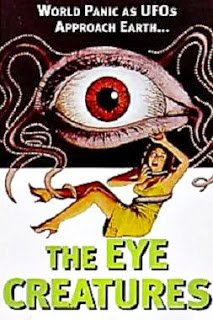 Tom and Crow are going through a “best friend” phase, but it doesn’t last very long.
The mads invention is a router Ouija board so you can summon the spirits of dead woodworkers and make fine crafted piece as well. Joel and the bots invention is the funny gag fax. It squirts water on whomever reads it.

Attack of the Eye Creatures

A man with a briefcase locked to his wrist delivers an important report to a General. The General then has Lt. Robertson report to him. He briefs him on Project Visitor and shows him a film describing a UFO that is expected to land on earth very soon. Robertson then heads back to his sector to await the UFOs arrival.
Back at his sector, two Air Force underlings are using their surveillance equipment to spy on teenagers making out in their cars in the woods. Robertson reads them the riot act but ultimately joins them.
Two men at the White Rock bar are trying to pick up some girls but they are not having any luck. One guy, Mike, gives up for the night but the other, Carl, is willing to wait a little longer. He takes their car and drives off into the woods. He then sees the flying saucer from earlier in the film landing. One of the local teens also sees it land. He tells some friends back at that same bar, but they don’t believe him.

Lt. Robertson just happens to be there and hears about the spaceship.
Carl gets a closer look at the spaceship, gets a little freaked out, hops in the car and takes off. Then we get to watch a couple teens, Stan and Susan, make out, how fun.

## Break
## Tom has a cool new car which Crow really takes a fancy to. Tom asks Crow if he wants to make out like the teens in the movie. Crow runs off in horror. Gypsy then comes by and Tom makes the same offer to her. She turns him down. Magic Voice also turns him down since she has no physical form. Tom has a lot of questions about making out. Joel swoops in and gives him a big kiss.

Carl rushes back to his place to tell his friend from the bar, Mike, about the saucer and how they are going to be rich. Mike is unimpressed and goes back to sleep.
Stan and Susan are heading home from their make out session, when they accidentally run over an alien. They also get a flat tire, so they walk to a nearby house. When no one answers the door, they go inside and use the phone to call the police and tell them they ran over an Alien. 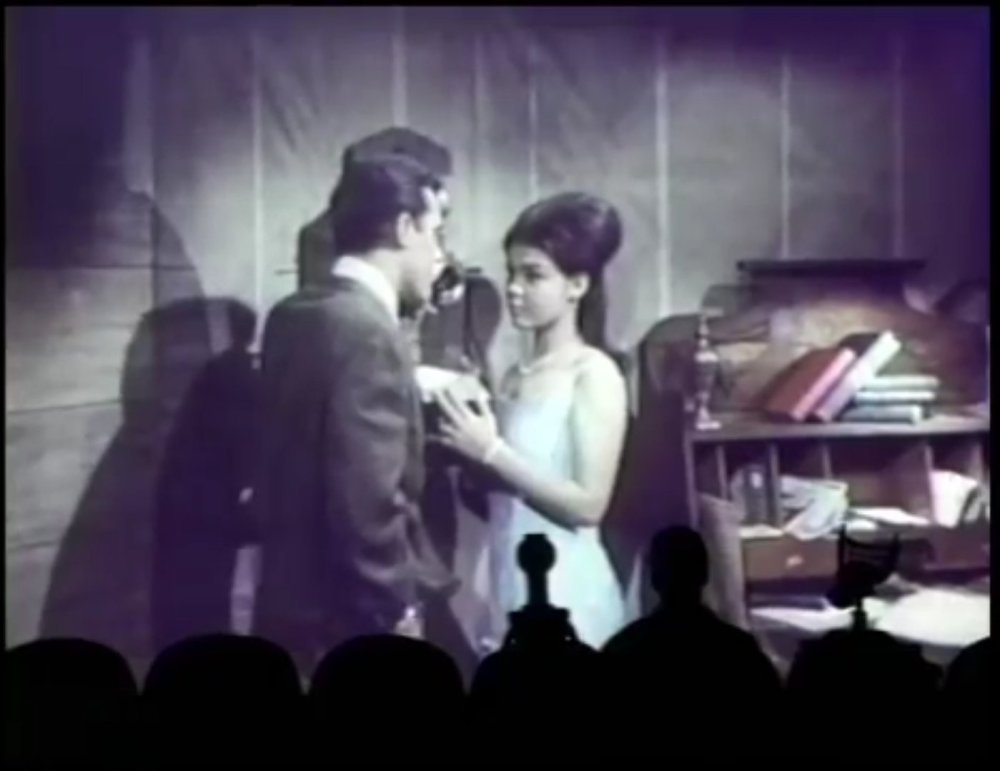 Unfortunately, the police don’t believe them. The old man that owns the house returns and runs them off his property.
Carl drives back out to look at the spaceship and he finds the alien body by Stan’s car. Now he’s sure he and Mike are going to be rich. He prepares to get the body into his car when he is attacked by four more aliens. They easily kill him.

The air force guys drive out to get a look at the spaceship. The do absolutely nothing but look at it.
Stan and Susan walk back to their car. The cops show up after all. They remove the body that they find at the scene and have Stan blow into a breathalyzer. Of course Stan hasn’t been drinking so he’s not worried. The police take him in to custody anyway. Turns out the body the cops found was Carl’s not the alien.
At the station the cops want Stan to sign a confession admitting to killing Carl but he refuses. He and Susan insist that they hit an alien. Susan’s father, who happens to be a local attorney, shows up. He’s mad at Susan for going out with Stan but tells her he will try to get her out of trouble, but not that thug Stan. 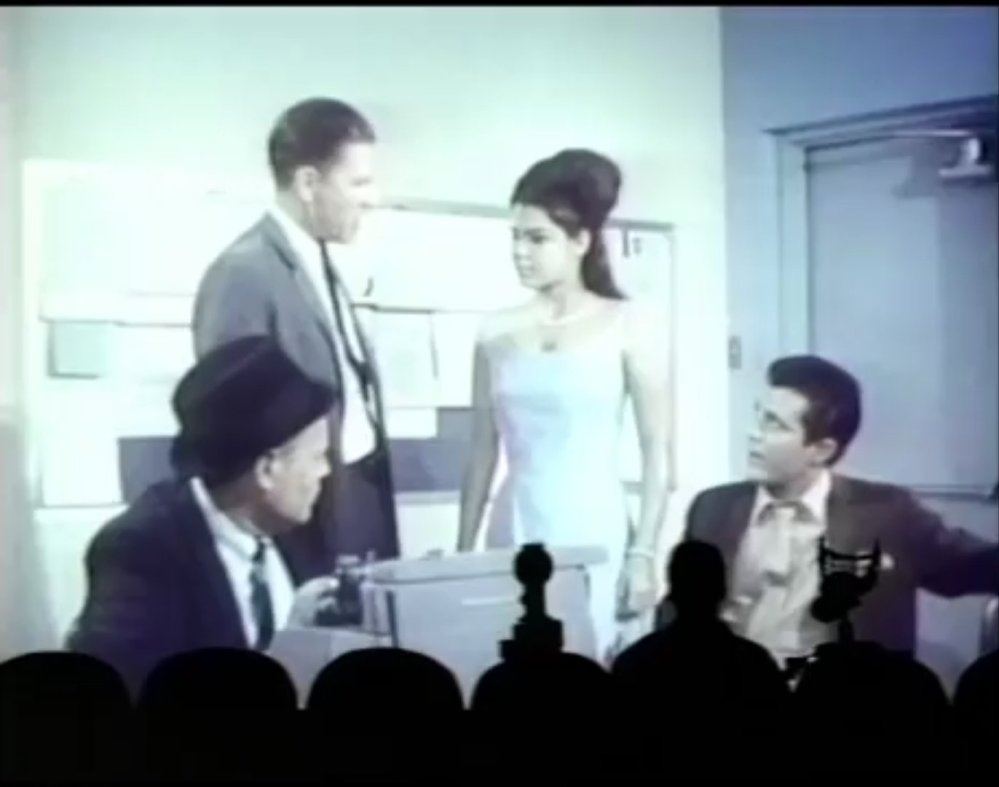 Back at the spaceship, the air force guys try yelling at and then shooting at the craft, but nothing happens.
At the local funeral home, Stan, Susan and the cops get a look at Carl. The two love birds swear they have never seen him before and that they hit a spaceman. Seeing as how Carl appears to be a drifter, Susan’s dad will talk to Mike and see if he will not press charges.
The air force gang try to use a cutting torch on the spaceship. Unfortunately, this causes the ship to explode.
The explosion causes all the cops to go outside and investigate, which means they leave Stan (John Ashley) and Susan alone. They just walk out the back door of the station and take the lead investigator’s car.
The two air force underlings from earlier try to get another peek at the youngster making out in the woods. Instead they get a closeup look at one of the aliens but they figure it must be a monster movie. 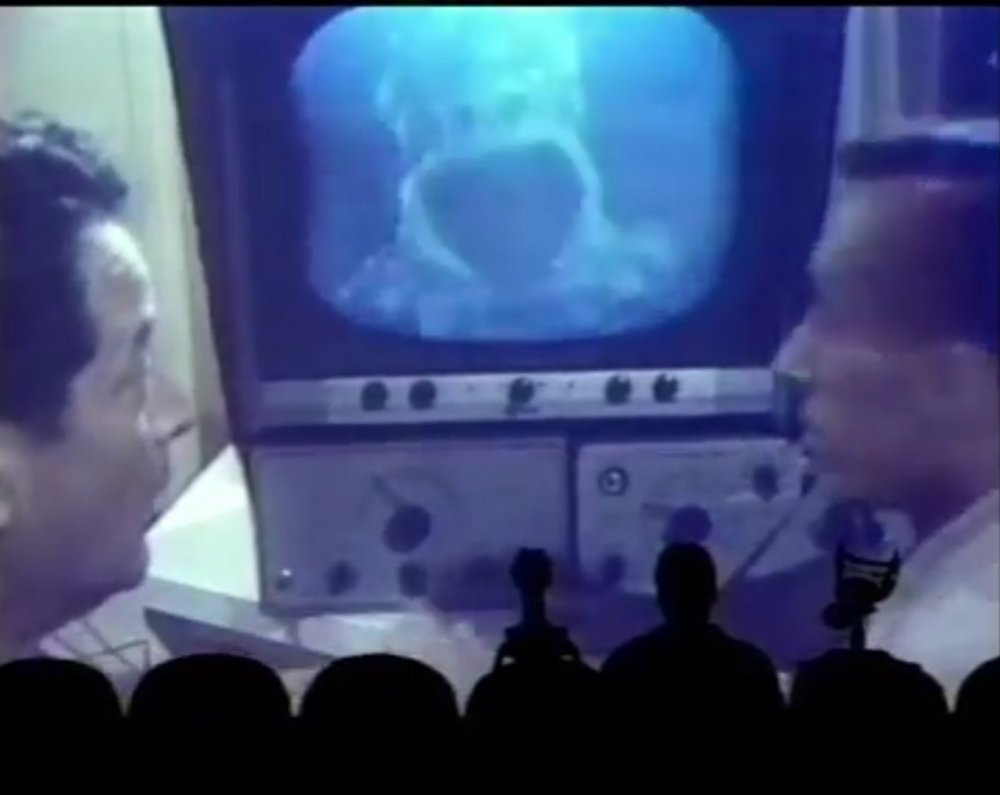 Stan and Susan go back to the accident site and look around. They don’t find anything, so they drive off. Unbeknownst to them, the severed hand of the alien they hit crawls into the car to ride along with them. It crawls up and spooks the crap out of Susan. They abandon the car and walk to the house where Mike is staying. They explain to him what has happened. He calls the police to verify the story, then the three of them head back to the woods. Mike brings his camera.

## Break
## Joel and the bots dress up as The Rip Taylor Trio and make corny jokes about the eye creatures. 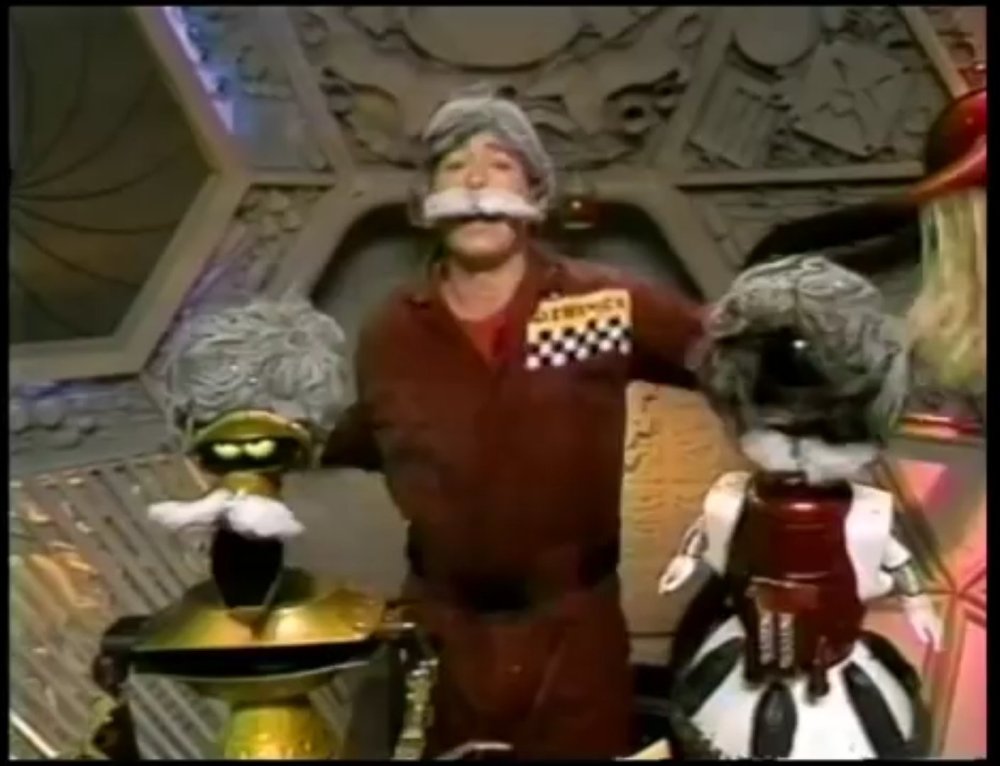 They find the hand crawling around in the back of the cop car. Mike is flabbergasted and quickly takes a picture of it. When he does, the hand sudden disappears in a flash. Not sure what to do next, they try to head over to the police station, but the car battery is dead. Uh oh, here come the eye creatures. When all hope looks to be lost, Stan turns on the spot light on the car and kills one of the creatures.
Now they know how to stop them but the battery is to low for the light to work anymore.
Mike panics and takes off running. Bad idea. The creatures easily catch him and then there was no more Mike. This allows Stan and Susan to escape. They go back to the old man’s house to call the cops. They try to turn themselves in but the police are no long interested in them. Turns out Carl died from a heart attack and not from Stan hitting him. They aren’t even interested in them stealing the cop car. Not sure what to do next, the two of them head back to the woods to see if they can get all of their friends to stop kissing and help them.
Stan, Susan and all of their friends surround the creatures with their cars

and then turn on their headlights. One by one the creatures explode. The earth has been saved. They even find Mike and he’s alive. Stan and Susan decide to commemorate the night by eloping.

## Joel and the bots discuss how the film’s producers just did not care how bad the movie was. Dr Forester and Frank disagree. They even have the director with them to prove it. Turns out he just didn’t care. 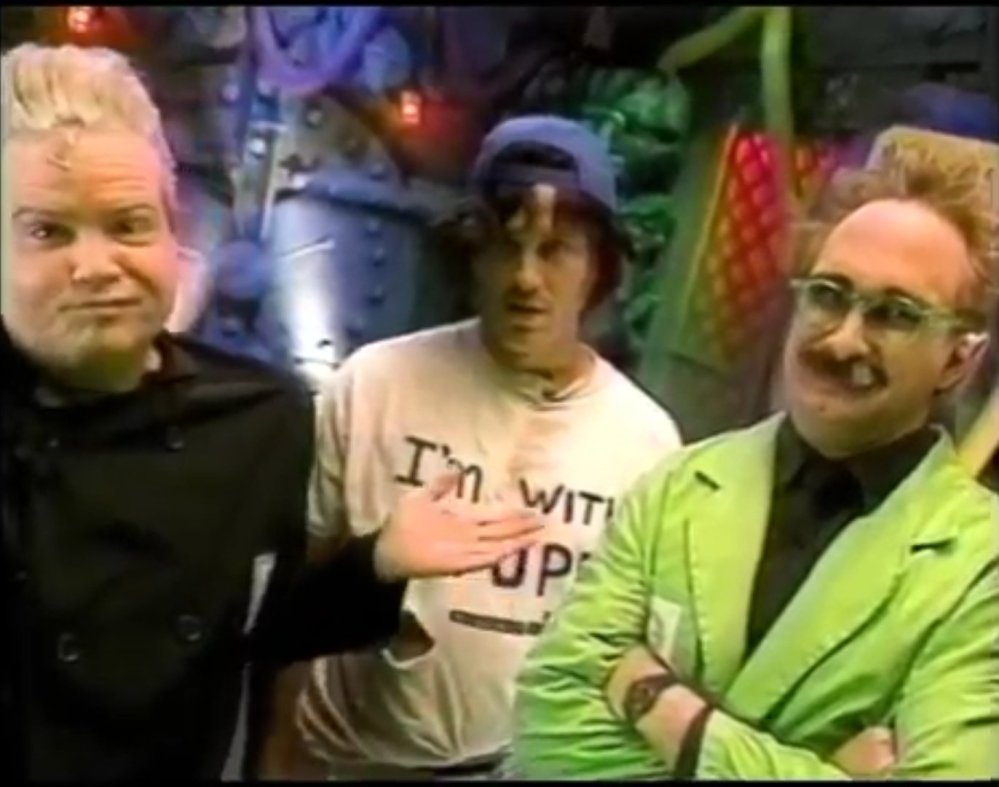 John Ashley appeared in wide variety of films and TV shows throughout the 50’s, 60’s and 70’s. He also had a short music career, ran several movie theaters in his home state of Texas, produced horror movies in the Philippines and eventually became a producer of the A-team. He died in 1997 of a heart attack at the age of 62.

## Lenny and Squiggy join the Navy. 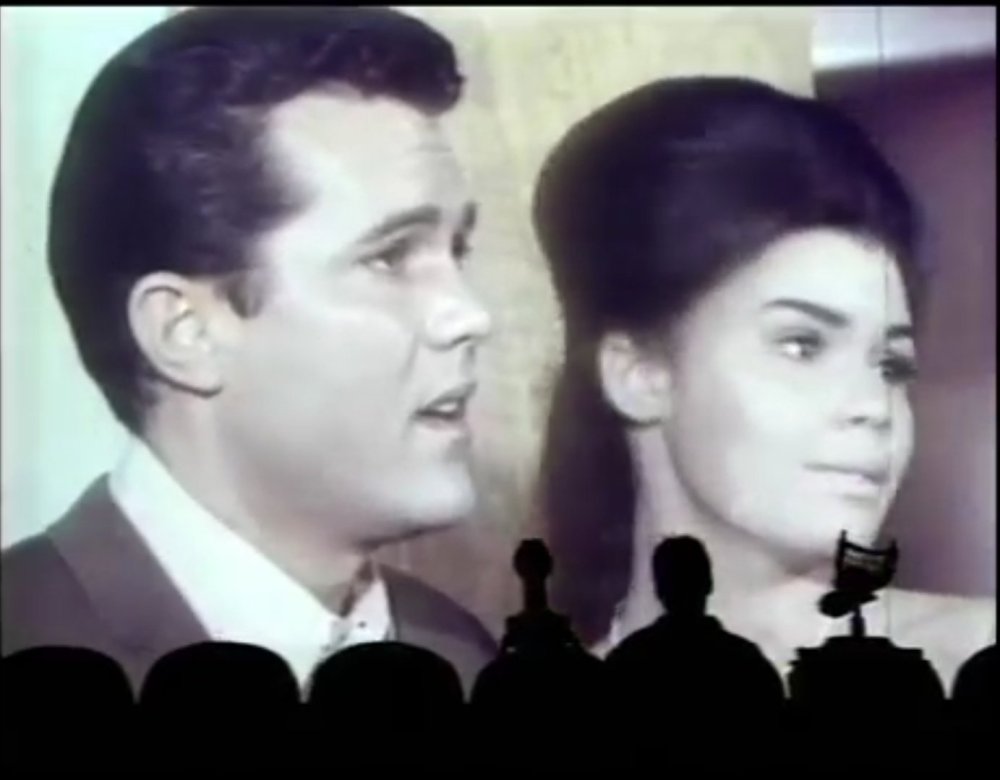 ## “Okay, Gentlemen. Your suits didn’t come in, so tomorrow just wear black and your mask.” 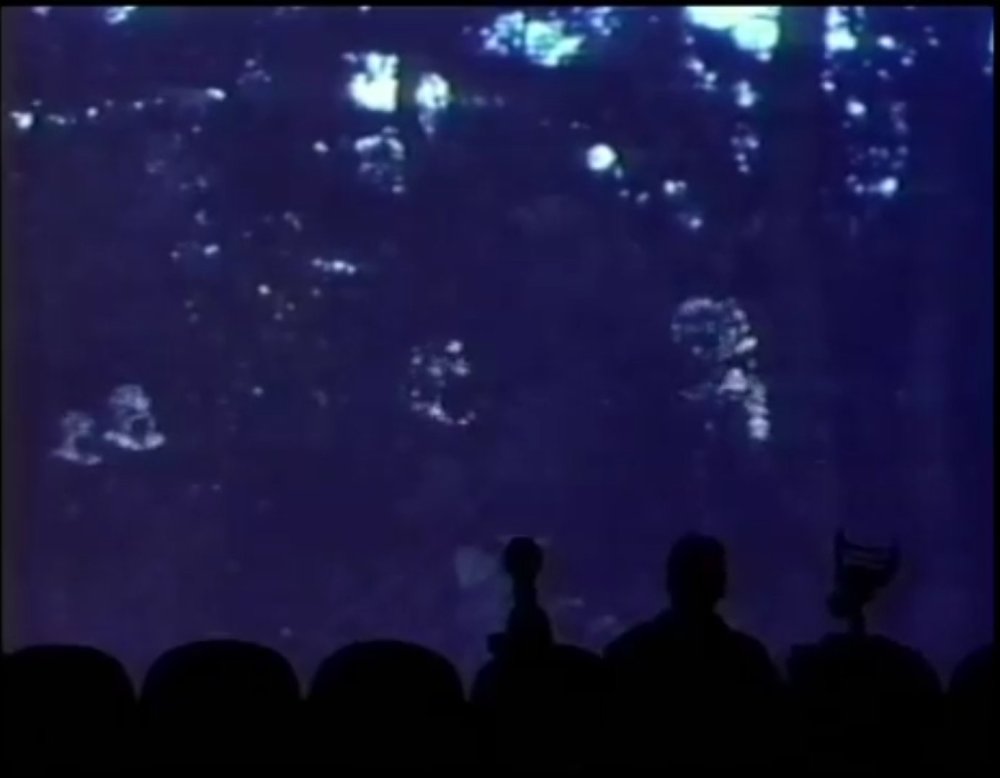 This was another tuff one to get through. The movie is terrible but the host segments were very good.